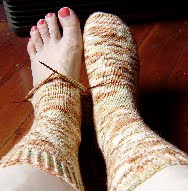 Knitting again, after a burst of jewellery making in the run up to christmas and then a little diversion into cross stitch. Knitting and summer don't always go together, but socks are always a safe choice - and I always seem to have a couple of pairs half finished. 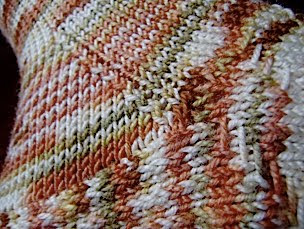 hese ones are in Blue Moon's Socks that Rock in a colourway called Gibson. They're a pretty standard top down sock, borrowing a stitch pattern called Sliding Bars from one of Cat Bordhi's books, which you can just barely see in the second image. 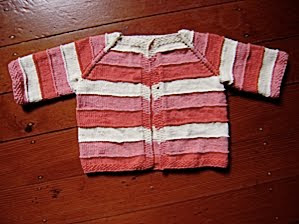 Both are in Morris & Sons' Paddington, which is 80/20 bamboo/merino. It's a gorgeous yarn - with the silky touch that bamboo has. The pattern is my variation on Helena from Knitty but with a square neck, and with the stripes sort of influenced by Dream in Color's Tulip cardigan. 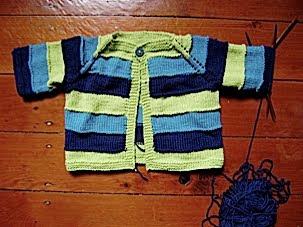 The autumny one is bigger - probably good for about a one year old; the blue green one is much closer to genuine new baby. I'm not a big fan of traditional pastels for babies.
Posted by Pamela at 3:34 pm