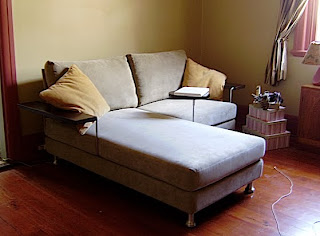 So all that remains is to change my mind a couple more times about just where in the room I want it. And to make new cushion covers, because these ones don't really work.

1. If you want to donate large items to charity, assume that you need to contact them at least 2 weeks before you want them to come and pick the thing up. Not one week. Like you might have thought. Because if you do that, you'll end up having to store the new furniture in the spare room for a week. Which is really disappointing because of course you want to use it straight away.

2. But then, it turns out that the charities are so overwhelmed with donations of stuff that they are really picky about what they'll take. No: really, really, picky. Which is fair enough, it's their call but it would be helpful if they'd tell you that up front - like saying "if its not in basically as-new condition we don't want it" - instead of asking "is it ripped or stained" as their qualifying question when you call them. Because that is rather misleading. And if they were up front with you then you'd know what they were after and you wouldn't waste a whole day at home from work waiting for them to come and turn down your donation and then another day waiting for someone else to take it away.

Not that I'm cross about this.
Posted by Pamela at 4:03 pm