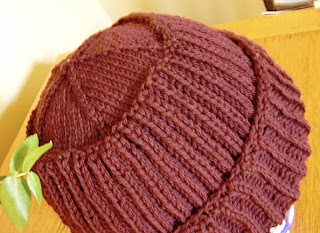 They say there's nothing original under the sun, and this hat would seem to be proof of that.

The inspiration - apart from wanting something warm for winter - was this pic of Tom's Watch Cap (scroll down) at The Panopticon.

The brioche-in-the-round instructions came from the briochestitch.com and the crown shaping is borrowed directly from the shaping on Crosspatch at Knitty.

I did make it myself, though, which surely counts for something :)

For future reference or anyone who wants to replicate it: 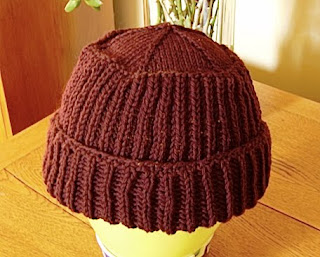 Yarn:
Cascade 220 in a dark chocolaty brown.
The colour number seems to have faded from the ball band (its been in the stash for a while). This photo is the best representation of the actual colour - the others are a bit light.

I used slightly less than one skein - so a bit less than 220 yards.

Gauge:
18 sts and 24 rows on 5mm needles in stocking stitch.

Needles etc:
5mm needles - 16" (or smaller) circular for the body of the hat, double pointed needles once you start the decreases on the crown.
Tapestry needle to weave in ends
One stitch marker 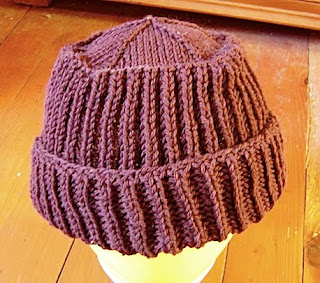 Measurements:
The finished hat is about 23" around, lying flat and unstretched. There's plenty of stretch in it, given the nature of the brioche stitch.

If you want to make it larger or smaller, or need a different number of stitches because you're working to a different gauge, I've put a few notes at the end of the instructions that might help.

How to make it:
Cast on 80 sts and join to work in the round, being careful not to twist and placing a stitch marker to indicate the beginning of the round.

Following these directions for brioche stitch in the round, starting with the prep round, work until your work measures about 8.5".

(You can, of course, vary this measurement to suit yourself, just be aware that the crown is virtually flat - not domed like a typical beanie - so it doesn't add any height to the hat.)

Now, work one purl round before starting the crown shaping.

Note that every second stitch will actually be more like a p2tog - because you'll still have the yo which you created in the last round of brioche which you worked.

It's worth counting your stitches at the end of this round, just to make sure you're back to 80. 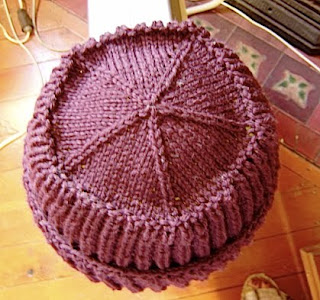 Weave in ends, and you're done.

Notes for varying the size
If you want to vary the number of stitches either to change the size or suit another gauge, just bear in mind that you need an even number of stitches for the brioche, and you'll need a number divisible by 5 for the crown shaping to work.

You could cheat on the latter by starting out with an even number and then adding or subtracting a stitch or two in the purl round before the shaping starts, if you're having trouble getting to a number that is divisible by both 2 and 5.

For the crown shaping, if your number of stitches is divisible by 10, then you're good to follow the instructions, working either more or fewer stitches between the S2KPs in the first round as appropriate. (That first round is stitch total divided by 5, minus 3 - eg 80/5 = 16-3 = 13.)

If you are starting out with a number of stitches divisible by 5 but not 10, you'll eventually get down to 15 sts, making the last decrease round S2KP 5 times to take you to 5 sts.
Posted by Pamela at 8:46 am