Estonia meets the Mohave desert - or the aeolian shawl 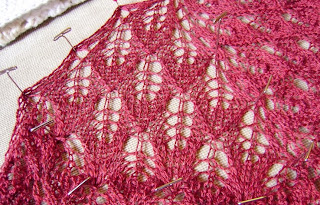 A seemingly odd combination, until you read Elizabeth Freeman's lovely description of the desert influences on her pattern. The piece pinned out above shows yucca, the first of the patterns in the shawl.

This was another one of those patterns that I knew I wanted to knit as soon as I saw it, and that was mostly because I wanted the experience of knitting it. I mean I want the finished article as well, but it's becoming increasingly obvious to me how much of a process knitter I am. Point me at something that inspires a "that looks difficult" or "that looks different" or "I haven't seen/done that before" and there's a good chance it will end up on the I-want-to-knit-that list.

I'm opting to knit this without the beading - in large part because I'm not sure I have the patience to place more than 2000 beads.

And here she is on the needles with stitch markers in place to help keep me on track. The pattern really isn't difficult (for anyone with some lace experience) - or hasn't been so far (hope I'm not jinxing myself for later sections!).

My tip, for anyone new to lace and repeating patterns (everyone else probably already knows this), is liberal use of stitch markers, as illustrated below. 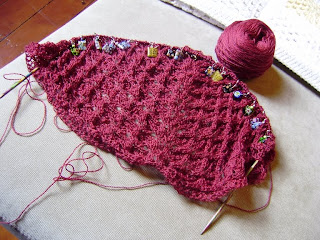 A marker between each pattern repeat means that if (when) you do stuff something up it shows up a lot sooner - you tend to discover it in that repeat, rather than getting to the end of the row only to discover you're out by a stitch. I reckon its worth it, even in something like this where there's a bit of moving markers around - in this particular pattern when you get back to the beginning of the 8 row repeat, the next set of 8 rows is offset several stitches relative to the set you just completed.
Posted by Pamela at 5:07 pm