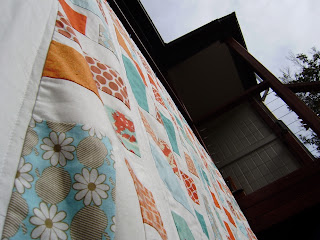 There was juuuust enough fabric in the bundle (12 fat quarters) to make 80 blocks.

Mind, this is after I made a couple of errors while cutting: the Ta Dot Sea doesn't appear in the quilt at all, because I managed to cut the whole fat quarter in 2.25" strips instead of 3.25" without noticing 'til I was done. There's less of the Pie Basket Fiesta than there should be for a similar reason.


To up-size the quilt (finished size is approx 80" x 98"), as well as making more blocks, I increased the size of the sashing between the blocks. Other than that, she's pretty much faithful to the original, down to the detail in the border.


Fabric for the bias (and also the plain white backing) from Craft Depot.