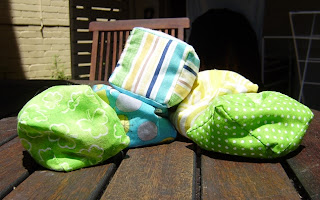 Rather than pinning pattern pieces to fabric - with all the time that takes and damage to the tissue paper it causes, I now plan to use pattern weights.

Like Ruby from Zaaberry, I've been sewing for years without having heard of, much less used them.

The fabric is leftovers, mainly from niece-the-younger's Christmas quilt. They're filled - about two-thirds full - with some sort of lentils.

Idea and tutorial from Zaaberry via Sew Mama Sew.
Posted by Pamela at 3:58 pm