I've been on a smallish shawls binge for a while now. 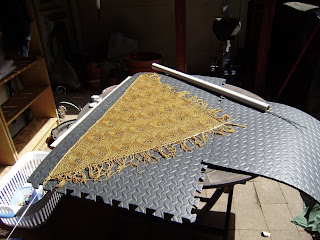 This is Indigenous, and it's intended as a birthday gift for my sister (birthday not until July - I can't believe I'm this organised). The yarn is the merino/tussah silk mix Yet from Miss Babs in Old Gold. 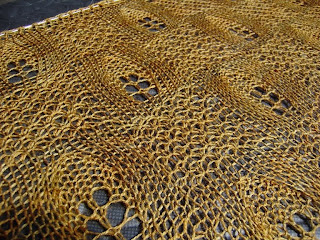 Indigenous is a clever design, starting from just 3 sts. The triangle just grows and grows, so it's one of those designs where you can make it as large as you like. I might make another, larger one, for myself.

And this is Annis. Also planned as a birthday present, this one for my mother (in June). Also in Yet, the colour is called French Marigold. 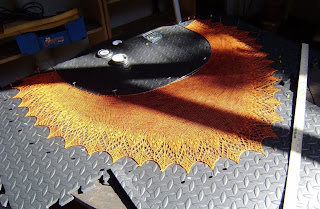 Another clever design, you work the long, lacy edge first then shape the crescent-like body by working short rows over stocking stitch.

The edge is an Estonian pattern, or Estonian-influenced: 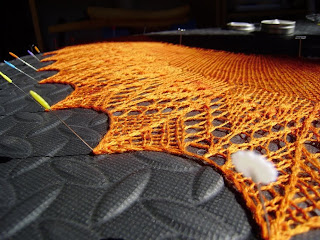 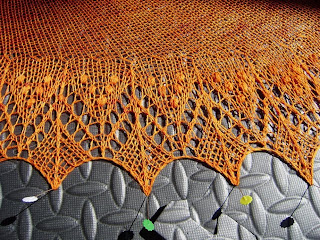 Still on the needles, is a (modified) version of the Beginner's Triangle from A Gathering of Lace for myself. The modification is nothing terrifically exciting, just changing the pattern from garter stitch to stocking. But more of that another day.

I've always pinned blocking out inside previously - on the bed, on the floor - so this is my first venture in blocking in the open air. Since you shouldn't block (or dry) your knitting in full sun, I had to improvise a bit this morning blocking Indigenous: 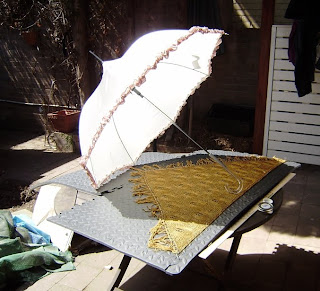 It's a lovely warm Sydney early autumn kind of day, so she dried really quickly and I was able to pin out Annis as well. Pinning out yarn inside, I'm used to waiting all day for it to dry, so this is a real bonus.
Posted by Pamela at 12:15 pm